You can either download the compiled binaries from GitHub, or you can build the DOME executable from source.

You can download the latest public version of DOME from itch.io or GitHub. Pick the correct version for your computer’s operating system and architecture.

Once the download is complete, unzip the downloaded archive and place its contents in the directory you want to make your game in.

At this point, you should have an executable named dome in your current directory. Test your installation by opening a terminal/command-prompt, navigating to the directory and executing:

It should print out its version and SDL versions.

You can also download the example game.egg from the GitHub repository to test dome. Place it in the same folder as your executable and then run dome, and it should begin playing.

If you have Homebrew installed (Mac OS X, Linux and WSL), you can install DOME using the following commands:

This will install dome as a global command for use anywhere.

DOME should build on most unix-like platforms, so long as gcc, git and SDL2 are installed. If these are installed, you can skip to the Compilation step below.

On Mac OS X, you can install SDL2 by using Homebrew via the command brew install sdl2, or installing the official SDL2.framework file from the SDL2 website. Finally, you can also compile SDL2 from source and install it “the unix way”.

Windows is supported, but it’s only been tested using a MinGW-w64 MSYS2 environment. For information on setting this up, follow this guide.. You will need a version of SDL2 which is prepared specifically for MinGW-w64.

To compile on Linux, you need to either build SDL2 from source “the unix way”, or install a pre-prepared package appropriate to your distribution.

Once the prerequisites are met, you can clone the DOME repository and build an executable binary by doing the following in your terminal:

At this point, you should have an executable named dome in your current directory. Test your installation by running:

If all is well, you should see the example game: 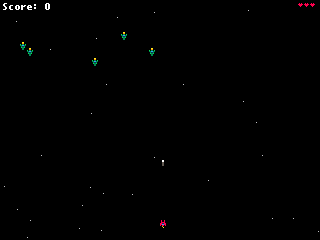